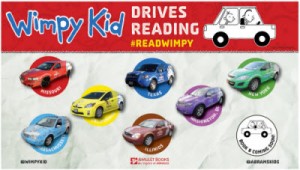 The first phase of the campaign will feature cars that are wrapped to resemble the first 7 books in the series. It will include car window clings as well as other social media. The cars will be driving across 7 regions of the country, and each car will have not only the color of the book but also reminders of the applicable book.

The second part of the campaign will be launched during Book Expo America in New York from May 29 to June 1.

To participate in the campaigns, you can do a couple of different things. One is to be on the lookout for the window clings and character cutout kits at your local stores and libraries. Another is to follow the #READWIMPY hash tag on Twitter and participate by tweeting photos when you spot one of the wrapped vehicles. (You can already see some fun tweets online)

It’s pretty clear that Wimpy Kid is ramping up for a huge release for the next book. Will you be a part of it?